On the obverse of the silver coin against the background of an unfolded cloth there are depicted the small National Emblem of Ukraine and a five line legend: УКРАЇНА (Ukraine), CITIUS ALTIUS FORTIUS, 10 ГРИВЕНЬ, 1999 (10 Hryvnia/1999), as well as the designation of the metal, its fineness and its weight in fineness. 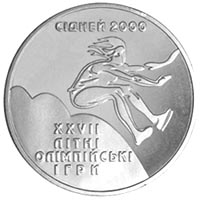 On the reverse of both coins there are depicted a jumping sportswoman and the inscriptions: СІДНЕЙ (Sydney) 2000 and XXVII / ЛІТНІ / ОЛІМПІЙСЬКІ / ІГРИ (XXVII/Summer/Olympic/Games)

Commemorative coin Triple Jump is dedicated to the 27th-Summer Olympic Games in Sydney (Australia) in 2000.

All coins in serie Sport
All coins 2000 year of release