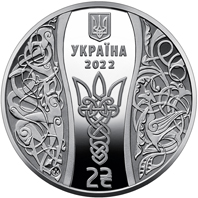 On the obverse of the coin are placed: at the top on a mirror background - the small State Emblem of Ukraine; in the center - an ornament with a braided trident, adorning an iron ax with inlays, dating from the X-XIII centuries. inscriptions: UKRAINE / 2022 (under the coat of arms), denomination of the coin - 2 and graphic symbol of the hryvnia (below); logo of the Mint of the National Bank of Ukraine (left on the background of the ornament). 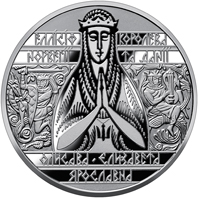 The reverse of the coin depicts a stylized image of Elizabeth Yaroslavna against the background of a decorative frieze made in the style of Scandinavian wood and stone carving, with scenes illustrating the military and poetic talents of her husband Harald the Stern; there are inscriptions imitating the ancient Scandinavian runic script: ELLISIF KOROLEVA / NORWAY AND DENMARK (on both sides of the image of Elizabeth), OLYSAVA ELIZAVETA / YAROSLAVNA (below).

It is dedicated to the Kyivan princess, the eldest daughter of Yaroslav the Wise, during whose reign the Kyivan-Russian state reached the peak of its power and who for diplomatic purposes entered into dynastic marriages that consolidated foreign policy alliances and raised the prestige of the state. In 1044, Elizabeth became the wife of King Harald of Norway, who during his first visit to Kiev fell in love with the princess and, gaining fame and treasure, returned for her. For the second time, Elizabeth Yaroslavna married King Sven II Estridsen of Denmark after the death of Harald, who died in battle. The main sources of information about Elizabeth are Icelandic royal sagas, Western chronicles and poems by Harald himself, which he composed in honor of his daughter Yaroslav.