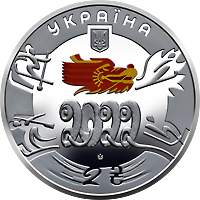 On the obverse of the coin are: at the top - the small State Emblem of Ukraine, over which the inscription in a semicircle UKRAINE, in the center in a mirror circle - the dragon's head (used pad printing), which is the protagonist of ancient legends, myths, fairy tales and one of China's most famous symbols , stylized as a serpent-like dragon covered with scales; left and right - four icons symbolizing Olympic sports; denomination below - 2 and graphic symbol of hryvnia; logo of the Mint of the National Bank of Ukraine (under the inscription 2022). 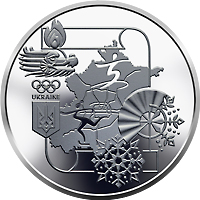 On the reverse of the coin, on a stylized outline of a sheet of paper, there is a composition symbolizing the country where the XXIV Olympic Winter Games will take place - China with its ancient culture, one of the elements of which is paper; map of Beijing, which shows the icons of a snowboarder and skater (center), to the right of which - a fan - an integral part of traditional Chinese culture, the first information about the appearance of which dates back to IV-II centuries. BC In addition, on the reverse of the coins there is a snowflake (bottom), the logo of the National Olympic Committee of Ukraine (left), above which the dragon's head and fire - one of the symbols of the Olympic Games.

Dedicated to an important event in world sports life - the XXIV Olympic Winter Games, which are scheduled for February 2022 in the Chinese capital - Beijing. The Olympic Games are prestigious international competitions that are, without exaggeration, a global event and are held under the auspices of the International Olympic Committee within the Olympic Movement. The national team of Ukraine will include representatives of the following sports: biathlon, alpine skiing, skating, curling, cross-country skiing, cross-country skiing, ski jumping, sledding, sledding and bobsleigh, snowboarding, figure skating, ice skating, skating. with a puck, short track.

All coins in serie Sport
All coins 2022 year of release