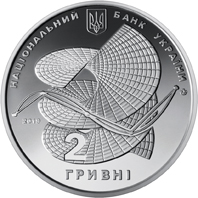 Obverse: at the top is Ukraine’s small coat of arms surrounded by the legend saying НАЦІОНАЛЬНИЙ (National) (to the left), БАНК УКРАЇНИ (Bank of Ukraine) (to the right); a stylized composition is in the center, against the smooth background, depicting a helicoid (a screw surface) in the background and a polygonal approximation of a curve and the coin’s face value 2 in the foreground; text ГРИВНІ (hryvnias) is at the bottom; the year the coin was minted 2019 is to the left; the mint mark of the NBU’s Banknote Printing and Minting Works is to the right. 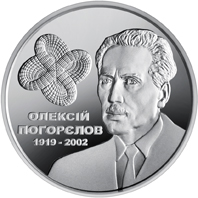 Reverse: a portrait of Oleksii Pohorielov is set against the smooth background; to its left is an abstract shape that symbolizes the mathematician’s topological research in geometry and a legend that reads ОЛЕКСІЙ/ПОГОРЄЛОВ/1919 – 2002 (OLEKSII/ POHORIELOV/1919 – 2002).

The commemorative coin is dedicated to Oleksii Pohorielov, the famous mathematician, teacher, design engineer, member of the National Academy of Science of Ukraine, honored scientist and engineer of Ukraine, and winner of many state prizes and scientific awards. The scientist’s research helped finish developing the theory of complete irregular convex surfaces and laid the foundation for nonlinear geometric theory of shells that are the most wide-spread elements of modern design. Oleksii Pohorielov is the author of dozens of monographs and textbooks (in particular, the original school textbook on geometry and textbooks on analytical and differential geometry for university students), most of which have been translated into English. 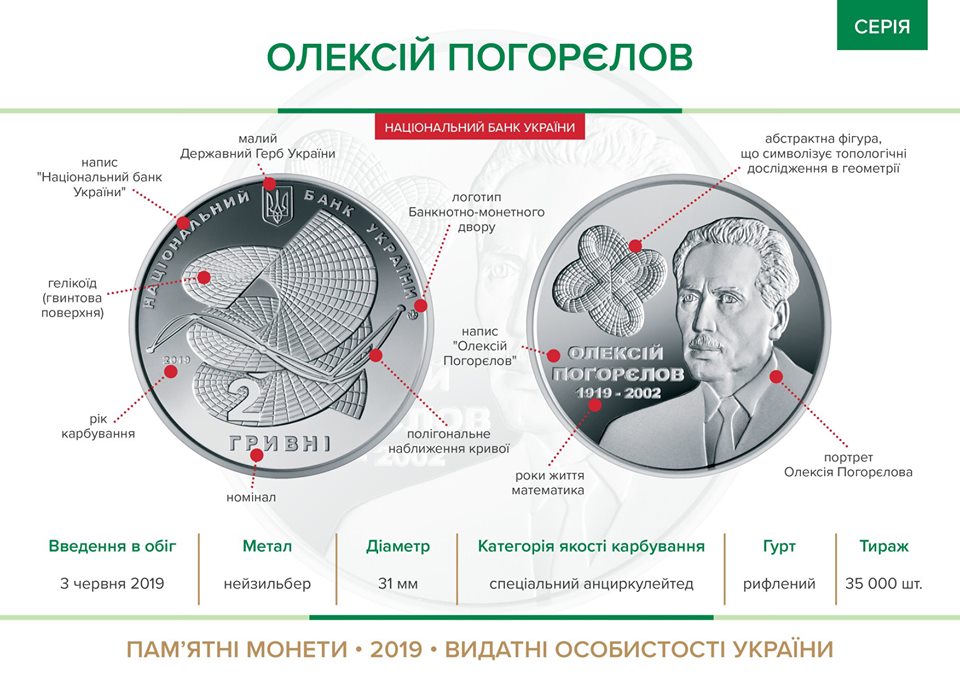