On the obverse there are: the Small Coat of Arms of Ukraine with the semicircular inscription Національний банк України (National Bank of Ukraine) (above), two military men of the UPR period with a Ukrainian woman`s profile within the Ukrainian wreath, symbolizing the young state, between them, and the legend: 2 ГРИВНІ (2 hryvnias) with the coin issue year 2009 and the logotype of the National Bank of Ukraine Mint (thereunder). 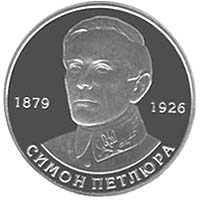 The commemorative coin `Symon Petliura` with the face value of 2 hryvnias is dedicated to Symon Vasyl`ovych Petliura, a statesman, politician and public figure, publicist, Tsentralna Rada member, the head of the Ukrainian General Army Committee, the General Secretary for Military Matters, the Holovnyi Otaman (Chief) of Military Forces of the Ukrainian People`s Republic (UPR), the Chairman of the UPR Directory.