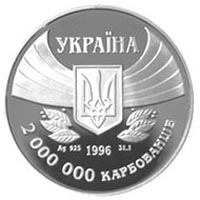 On the coin obverse there is the in the middle the Small State Emblem of Ukraine. To its both sides, there are conventionalized depictions of the stands and leaves of laurels. Above, there is УКРАЇНА inscription, underneath - 1996, the year of issue. Underneath, around the coins circumference there is an inscription: 2000000 КАРБОВАНЦІВ. On coin both sides from the issue date, there are designations of Аg 925 and 31,1, coin pure weight 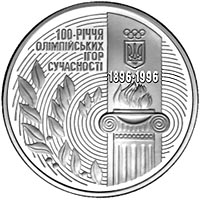 On the coin reverse there is a fragment of ancient column with Olympic flame over its capital. Above the flame there is an inscription 1896-1996 - dates of the І and XXVI Modern Olympic Games, as well as the emblem of the National Olympic Committee of Ukraine. Above, to the column left, there is a four line inscription 100-РІЧЧЯ ОЛІМПІЙСЬКИХ ІГОР СУЧАСНОСТІ, underneath - conventionalized leaves of laurels. Coin ground is made up of lines, symbolizing stadium tracks.

Jubilee coin is dedicated to Centennial of Modern Olympic Games. 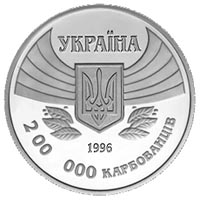 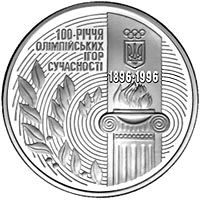