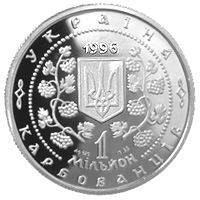 On the coin obverse there is the small State Emblem of Ukraine in the middle of the beads circumference decoration, framed with guelder-rose sprays. Above the State Emblem there is the year of issue -1996. Around the coin circumference there are inscriptions: УКРАЇНА - above, and three line inscription 1 МІЛЬЙОН КАРБОВАНЦІВ - underneath. On the silver coin beneath the guelder-rose sprays there are designations of Аg 925 and 15,55, coin`s pure weight. 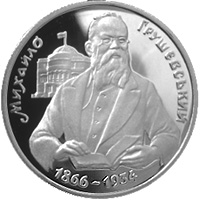 On the coin reverse in the centre there is a portrait of M.Hrushevsky, left on the background - the Central Rada House (now the Teacher Club), where the first president of the Ukrainian People`s Republic worked in 1917-1918. Around the coins circumference there are inscriptions: МИХАЙЛО - to the left, ГРУШЕВСЬКИЙ - to the right, and 1866-1934 - years of Hrushevsky`s birth and death.

The coin is dedicated to 130th anniversary of Mykhaylo Hrushevsky (1866-1934), an outstanding Ukrainian scientist, historian, academician, public and political figure, first president of the Ukrainian People`s Republic in 1917-1918. 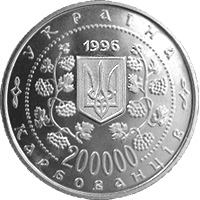