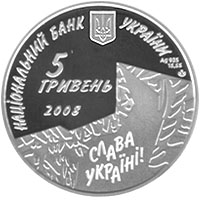 On the coin obverse there is a composition: the conventionalized broken uphill road, against the background whereof there is the inscription - СЛАВА/ УКРАЇНІ! (Glorified be / Ukraine!); above – the Small National Emblem of Ukraine and the semi-circular inscription - НАЦІОНАЛЬНИЙ БАНК УКРАЇНИ (National Bank of Ukraine), thereunder – the coin face value: П’ЯТЬ ГРИВЕНЬ (five hryvnias), the indication of metal and its fineness – Ag 925, weight in fineness – 15.55 g; There is also placed the logotype of the National Bank of Ukraine Mint. 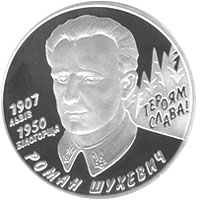 On the coin reverse there is a portrait of Roman Shukhevych against the background of a conventionalized forest, which symbolizes military resistance to invaders and the national - liberation movement in Ukraine, and placed are the inscriptions: to the right -ГЕРОЯМ/СЛАВА! (Glorified be / the Heroes!); to the left -1907/ЛЬВІВ/1950/БІЛОГОРЩА (1907/ Lviv/ 1950/ Bilohorscha) and below, the bow-shaped – РОМАН ШУХЕВИЧ (Roman Shukhevych).

The commemorative coin is dedicated to Roman Shukhevych, one of the outstanding leaders of the Ukrainian liberation movement of the 20 – 50s of the 20th century, a military and political figure. Roman Volodymyrovych Shukhevych (Taras Chuprynka) – a lieutenant-general and the commander-in-chief of the Ukrainian Insurgent Army (1943-1950) is a bright representative of generation of the stormy 1920 - 40s.