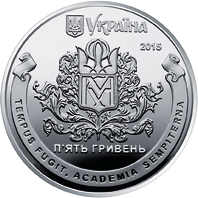 Obverse: above, there is the Small Coat of Arms of Ukraine, to the right of which there is the legend Україна (Ukraine) and the coin`s year of issue - 2015; in the center, against a smooth background, there is the coat of arms of the Kyiv Mohyla Academy framed with a ribbon with the university`s motto in Latin: TEMPUS FUGIT, ACADEMIA SEMPITERNA (time is running, academy is eternal); below the coat of arms is the coins face value: П`ЯТЬ ГРИВЕНЬ (5 hryvnias). 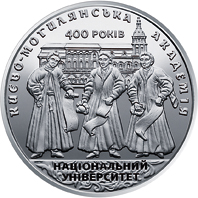 Reverse: against the background of the old academic (Ivan Mazepa`s) building there is a fragment of an engraving that depicts three students holding scrolls, and the following legends: КИЄВО-МОГИЛЯНСЬКА АКАДЕМІЯ (Kyiv Mohyla Academy) (above, in a semicircle), 400 РОКІВ (400 years) (above the building), and НАЦІОНАЛЬНИЙ/УНІВЕРСИТЕТ (national/university) (above, against the background of stylized Baroque ornament).

The commemorative coin is dedicated to one of the oldest universities of Ukraine established in 1615 as Kyiv Brotherhood School. The role of Kyiv-Mohyla Academy in Ukraine`s history cannot be overestimated. It had an enormous influence on the development of education, science, culture, and public awareness, raised the nation`s general intelligence etc. During its century-old history, the academy and its alumni have played a formative role at many stages of historical development of Ukraine. 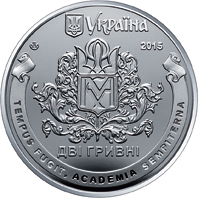 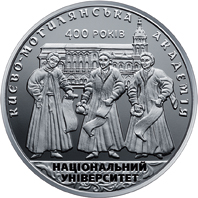