Buy a coin Hero-City of Kyiv 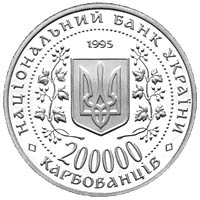 On the coin obverse there is the Small State Emblem of Ukraine in the middle of the beads circumference decoration, framed with guelder-rose sprays. There are per five leaves and three bunch of berries on each spray. Upper bunch consists of seven berries, middle - of five, lower - of six berries. Above the State Emblem, there is the year of issue -1995. Beneath the small State Emblem, there ia a two line inscription 200000 КАРБОВАНЦІВ, the coin face value (200000 number is split by the beads ornamentation). Around the coin circumference, between the external edge and the beads ornamentation, there is an inscription НАЦІОНАЛЬНИЙ БАНК УКРАЇНИ split with rhombic separative marks from the word КАРБОВАНЦІВ. 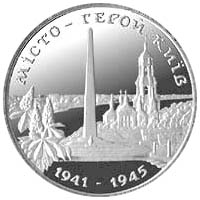 On the coin reverse in the center, against a background of the Dnipro river and the left bank city district there are a depiction of the main fragment of memorial complex Park of Eternal Glory - Obelisk of Glory at the grave of Unknown soldier and the part of the Path of Perished Heroes with graves of defenders and liberators of Kyiv. There are depictions of the Savior Church at Berestovo, Great Belfry of Kiev-Pechersk Lavra, of trees and decorative bushes to the Obelisk right side. To its left there is a chestnut spray with three floscules. Around the circumference there is the inscription: МІСТО - at the upper part and 1941-1945 - at the lower part.

Buy a coin Hero-City of Kyiv