Buy a coin The Ground Forces of Ukraine&rsquo;s Armed Forces 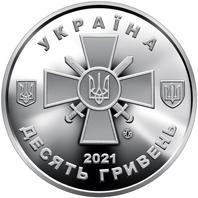 Reverse: to the left is a Ukrainian soldier holding a weapon; there is the following stylized composition: military equipment against a camouflage background; to the right, against a smooth background, is the following semicircular legend: СУХОПУТНІ ВІЙСЬКА ЗСУ (the ground forces of Ukraine’s Armed Forces).

This coin celebrates the forces that form the basis of the combat power of Ukraine’s Armed Forces. In view of their purpose and scope of tasks, these forces play a crucial role in the Armed Forces’ performance of their functions, both in peacetime and in wartime. The ground forces are comprised of mechanized, tank and missile troops, artillery, the army air force, air defense units, special forces, logistics units, and territorial defense brigades.

All coins in serie Ukraine&#039;s Armed Forces
All coins 2021 year of release

Buy a coin The Ground Forces of Ukraine&rsquo;s Armed Forces