Buy a coin The Battle of Khotyn

Obverse: above, against a smooth background, is Ukraine`s small coat of arms, to the right of which is the legend УКРАЇНА (Ukraine); in the center is a composition symbolizing the siege of the army camp at Khotyn: a fortress (to the left), the defending army (to the right of the fortress) surrounded by billowing smoke; above, beyond the river, to the right of the fortress, is a stylized camp of the assaulting army; there are the following legends: 5/ГРИВЕНЬ (5/hryvnias) (against the backdrop of the fortress), the coin’s issues year – 2021 (beneath, against a matt background), the mint mark of the NBU’s Banknote Printing and Minting Works is under the issue year. 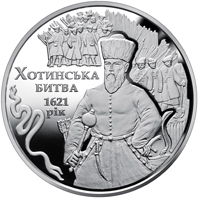 Reverse: in the foreground is an image of Hetman Petro Sahaidachnyi; in the foreground are figures of soldiers; to the left, against a smooth background, are the following legends: ХОТИНСЬКА/ БИТВА/ 1621/ РІК (Battle/ of /Khotyn/ 1621).

This coin is dedicated to an important event in European history in the first half of the 17th century, which effectively decided the fate of Christian civilization – the 400th anniversary of the Battle of Khotyn, during which the Zaporozhian-Polish-Lithuanian army stopped the Ottoman army on the Moldovan border. In September 1621, the army of Sultan Osman II, many thousands strong, gathered on the battlefield against a much smaller force. The Ottomans attacked the Cossack positions seventeen times, and the positions of the Polish-Lithuanian forces about ten times. The role of the Zaporozhian army, led by the brilliant politician and commander Petro Konashevych-Sahaidachnyi, who employed night-fighting tactics on the enemy, was particularly significant. Due to huge losses (the army of Ottoman II lost about 40,000 soldiers), the Ottoman Empire was forced to abandon plans to conquer Europe and instead sign the Khotyn Peace Treaty.

Buy a coin The Battle of Khotyn

Discussion coins The Battle of Khotyn (13)