Buy a coin The Era of Peace 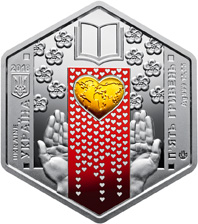 Obverse: to the left, are the coin issue year 2018, Ukraine’s small coat of arms and the vertical legends UKRAINE/УКРАЇНА; to the right, are the coin face value П’ЯТЬ ГРИВЕНЬ (five hryvnias), the coin’s metal and fine weight Ag 999 15,55 (Ag 999 15.55) (vertically), and the mint mark of the NBU’s Banknote Printing and Minting Works (beneath); above, against a smooth background, is a book, symbolizing learning – on both sides of the book are flowers; under the book is a composition that symbolizes the unity of humans and the planet Earth: against a red background containing silver hearts (pad printing) is a gilt heart (local gilding, fine weight no less than 0,0001 g), inside which are the outlines of the continents; the composition is supported by human hands, which symbolize life protection and preservation. 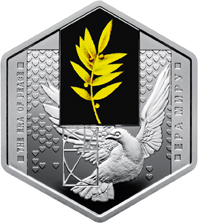 Reverse: against the backdrop of hearts is the following composition: against a black background is a colored olive branch (pad printing), which is held by a dove – a symbol of peace; to the left of the dove is a graphical representations of the golden ratio, which Renaissance thinkers called the embodiment of a divine nature ; there are the following vertical legends: THE ERA OF PEACE (to the left) and ЕРА МИРУ (to the right).

A set of four commemorative coins, 5 hryvnias in face value each, in a souvenir pack entitled 100 Years since the Establishment of Ukraine’s National Academy of Sciences: The Era of Peace, The Era of Changes, The Era of Technologies, The Human, Time, Space. These coins celebrate science, which is the most important engine of technical, social and cultural progress. Science is also an integral component of the spiritual culture of the humans that have entered the era of information and high technologies. 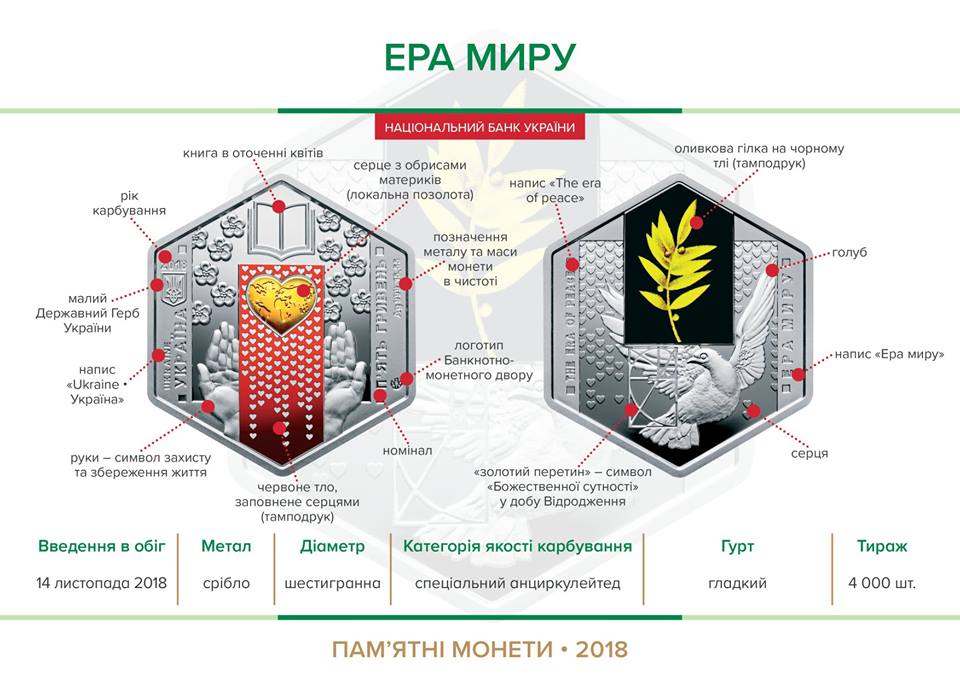 Discussion coins The Era of Peace (12)