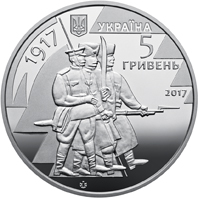 Obverse: above is Ukraine`s small coat of arms, to the right of which is the legend УКРАЇНА (Ukraine); under the legend are the coin`s face value and issue year - 5/ГРИВЕНЬ/2017 (5/hryvnias/2017); in the center is a conventionalized composition in the Ukrainian Avant-Guard style of the early 20th century - soldiers wearing uniform that belonged to various military units during the Ukrainian revolution, one of the soldiers holds a flag with the legend - 1917; beneath is the mint mark of the NBU Banknote Printing and Minting Works. 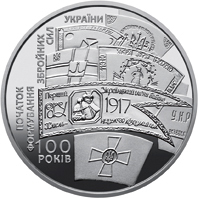 Reverse: there are conventionalized flags that belonged to the first Ukrainian military units, the most prominent of which is the flag of the First Ukrainian Bohdan Khmelnytskyi Regiment; other flags include old flags of the Ukrainian State Navy and the Ukrainian Zaporozhian Regiment, which was created in Moscow by Ukrainian soldiers; below are the flag of Ukraine`s present-day armed forces and the legends: 100/РОКІВ (100/years) (below to the left), and ПОЧАТОК ФОРМУВАННЯ ЗБРОЙНИХ СИЛ (vertical to the left) УКРАЇНИ (above) (the beginning of the formation of the Ukrainian armed forces). 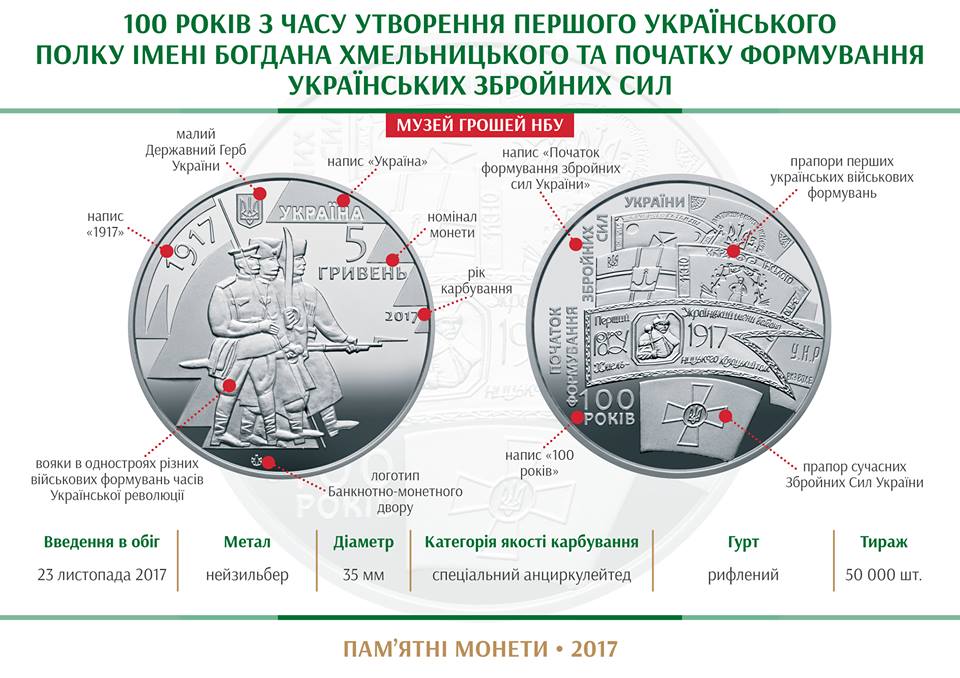 All coins in serie Ukraine&#039;s Armed Forces
All coins 2017 year of release