Buy a coin 725 years of the City of Rivne 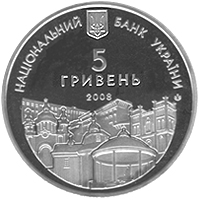 On the coin obverse there is the composition consisting of the historical and architectural monuments of the city, among them: the monument to Mariia Rivnenska Nesvytska, Church of the Assumption, Cathedral of the Intercession, etc., above there is the Small National Emblem of Ukraine and the semicircular inscription НАЦІОНАЛЬНИЙ БАНК УКРАЇНИ (National Bank of Ukraine); the legend 5 ГРИВЕНЬ 2008 (5 hryvnias 2008) is thereunder, as well as the logotype of the National Bank of Ukraine Mint (on the right). 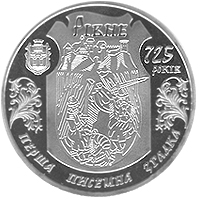 On the coin reverse there is a conventionalized parchment scroll with a scene of the battle between the Polish and Lithuanian armies with the record whereof the city chronology begins. To the left and right of the scroll there is a conventionalized ornamental pattern, above which there is the coat of arms of the city (at the left) and the legend 725/РОКІВ (725 years) (on the right); underneath there is the semicircular inscription ПЕРША ПИСЕМНА ЗГАДКА (first record).

The commemorative coin is dedicated to the centre of the Rivne Oblast situated on the Ustia-river. Rivne was first mentioned in 1283 as a town of the Kingdom of Halych-Volhynia in connection with the battle between the armies of Leszek II the Black, a duke of Krakow (Cracow), and Vytenis, a Lithuanian prince

Buy a coin 725 years of the City of Rivne

Discussion coins 725 years of the City of Rivne (2)