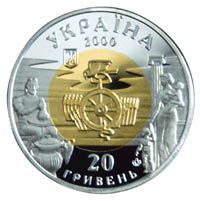 On the coin obverse in the centre of the insert ring and against the background of rye ears there is depicted of a symbolic wheel of history with a falcon sitting on it, underneath it there is depicted a snake; above and to the left there is the small National Emblem of Ukraine; within the outer ring, there are depicted a potter (on the left) right, a woman with children against the background of a Greek column (on the right), as well as the logotype of the NBU Mint and the inscriptions: УКРАЇНА / 2000 / 20 / ГРИВЕНЬ (Ukraine/ 20/ hryvnia/ 2000). 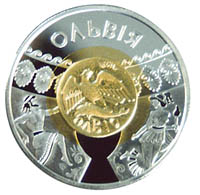 On the coin reverse within the insert ring there is a depiction of an Olbian gold coin; within the outer ring there are depicted the ornament and patterns of vase painting, which were characteristic for that period, as well as the inscription: ОЛЬВІЯ (Olbia)

The coin is dedicated to the city-state Olbia, one of the most important centres of ancient material and spiritual culture of Northern and North-Western Region of the Black Sea coast, which was founded at the beginning of 6th century B.C. in the Lower Bug basin region and existed for about 1000 years. There was in the city quite original coin production, manufacturing cast copper dolphin-figures and arrows, which served as legal tender