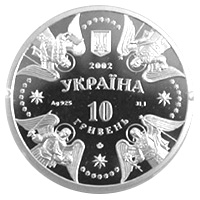 On the coin obverse there is depicted the small National Emblem of Ukraine surrounded by figures of four archangels from the cathedral murals and a four-line inscription: 2002, УКРАЇНА, 10, ГРИВЕНЬ (Ukraine/ 10/ hryvnia/ 2002), аs well as designation of metal, its fineness, and the coin weight in fineness. There is also the logotype of the NBU Mint 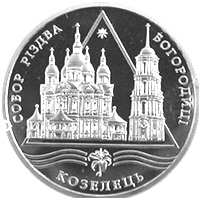 On the coin reverse there are depicted the temple and the bell-tower against the background of a symbolic triangle with the Star of Bethlehem in the upper corner. Under the triangle there is a lily flower - a symbol of purity; around the triangle there are circular inscriptions: СОБОР РІЗДВА (Cathedral of Nativity) -left, БОГОРОДИЦІ (of Virgin) -right, КОЗЕЛЕЦЬ (Kozelets ) -below.

The coin is dedicated to the Cathedral of Virgin`s Nativity in the town of Kozelets (Chernigiv region), an exquisite five-domed temple which was built in 1752 - 1763 according to a design project of architects B.Rastrelli, A.Kvasov and I.Hryhorovich-Barskyi. The temple is considered to be one of the best architectural works of Ukrainian baroque of the middle of 18th century.