Buy a coin Genoese Fortress in the town of Sudak 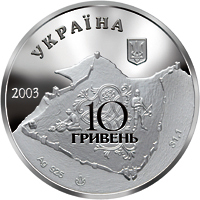 On the coin obverse there is depicted the fortress lay-out in whose centre against the background of a conventionalized ornament there is an inscription: 10 ГРИВЕНЬ (10 hryvnia. On both sides there are figures of a warrior with an arbalest (on the right) and a wine-grower (on the left); On the right there is the small National Emblem of Ukraine and inscriptions: УКРАЇНА (Ukraine) -above, 2003 (left); beneath there is the designation of the metal, its fineness and its weight in fineness, as well as the logotype of the NBU Mint is depicted 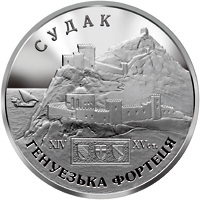 The coin is dedicated to the Genoese Fortress, a distinguished medieval fortification work of 14th-15th centuries located in Sudak, the former capital of Soldaia Consulate of the Genoese Republic in the Crimea. The fortress majestic ramparts and towers had been under construction for about 100 years and now belong to the most interesting monuments of the world architecture

Buy a coin Genoese Fortress in the town of Sudak

Discussion coins Genoese Fortress in the town of Sudak (0)