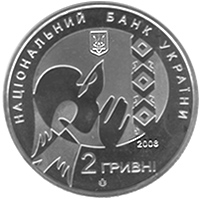 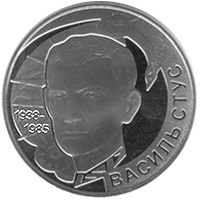 On the coin reverse there is depicted a portrait of Vasyl Stus against the background of Alla Horska conventionalized mosaics Woman-Bird, to the right of which there is the semicircular inscription: ВАСИЛЬ СТУС (Vasyl Stus

The coin is dedicated to Vasyl Stus (1938 – 1985), a public figure, translator, literary critic and poet of a tragic fate, whose works are translated into many languages of the world. A tireless fighter for human rights Vasyl Stus was a member ( in 1979 – 1980 - a chairman) of the Ukrainian Helsinki group for human rights observation