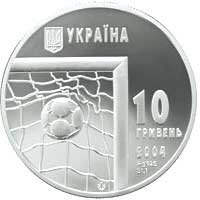 On the coin obverse there is engraved a ball in the goal; above there are the small State National Emblem of Ukraine and the inscription: УКРАЇНА (Ukraine); on the right of the goal there are the inscriptions: on the silver coin: 10/ ГРИВЕНЬ/ 2004,(10 /Hryvnia / 2004), as well as the designation of the metal, its fineness and its weight in fineness. Besides, there is the Mint logotype of the National Bank of Ukraine 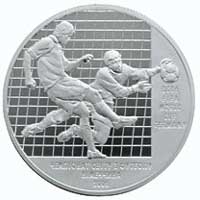 On the coin reverse against the background of the goal, there are depicted a football player and a goal-keeper with a ball playing the game; beneath there are inscriptions: ЧЕМПІОНАТ СВІТУ З ФУТБОЛУ, НІМЕЧЧИНА, 2006. (2006 Football World Cup/ Germany)

All coins in serie Sport
All coins 2004 year of release