Buy a coin 60 Years of Ukraine Membership in UN 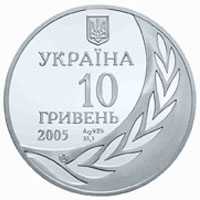 On the coin obverse on the right and against the relief background there is depicted an olive twig, which decorates the UN emblem (symbol of peace); against the glass background there is the small National Emblem of Ukraine, on left there are inscriptions: УКРАЇНА/ 10/ ГРИВЕНЬ/ 2005 (Ukraine/ 10 / hryvnia/ 2005), Аg 925, designation of metal and 31,1, the coin`s weight in fineness, as well as the Mint logotype of the National Bank of Ukraine 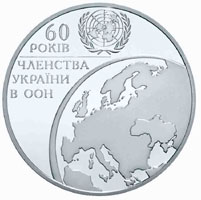 The coin is dedicated to 60th anniversary of Ukraine membership in the United Nations Organization - international organization of independent states, which was founded for preserving peace and international cooperation. Ukraine was among UN founding members

Buy a coin 60 Years of Ukraine Membership in UN