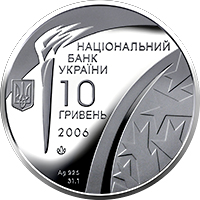 On the coin obverse there is a depiction of the Olympic torch against the background of a conventionalized glass toboggan road; to the right from the torch there are inscriptions: НАЦІОНАЛЬНИЙ БАНК УКРАЇНИ 10 ГРИВЕНЬ 2006 (National Bank of Ukraine) to the left there is the National Emblem of Ukraine; beneath: the logotype of the Mint of the National Bank of Ukraine; marking of the metal and its fineness Ag 925, and its weight in fineness.31,1 g. 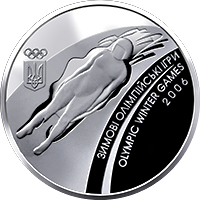 On the coin reverse a female tobogganer on the road is depicted, to the left there is the emblem of the National Olympic Committee of Ukraine against the background of a glass surface; to the right there are inscriptions: ЗИМОВІ ОЛІМПІЙСЬКІ ІГРИ / WINTER OLYMPIC GAMES/ 2006.

The coin continues the `Sport` Series and is dedicated to the XXth Winter Olympic Games, which took place in Turin (Italy)

All coins in serie Sport
All coins 2006 year of release