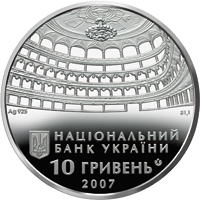 On the obverse of the 10 Hryvnia coin the theatre hall interior is depicted and the following inscriptions are placed: НАЦІОНАЛЬНИЙ/ БАНК УКРАЇНИ/ 10 ГРИВЕНЬ/ 2007 (National Bank of Ukraine/ 10 Hryvnias/ 2007), to the left whereof there is the Small National Emblem of Ukraine, as well as designation of the metal Ag 925 and weight in fineness 31,1. 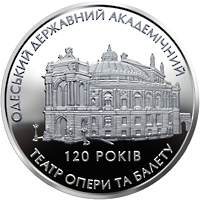 The coin is issued on the occasion of the 120th anniversary of the Odesa National Academic Opera and Ballet Theatre, a famous building which is a wide-known architectural monument built in the Viennese Baroque style according to the design project of architects Ferdinand Fellner and Hermann Helmer. The theatre was opened in 1887. The ceiling of the theatre hall was painted by the Vienna artist Franz Lefler with motives of Shakespeare`s plays. The theatre is famous not only due to its architecture but also due to its staging record. 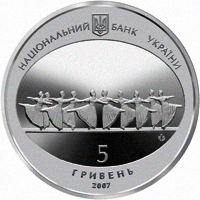 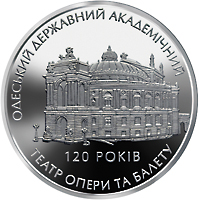