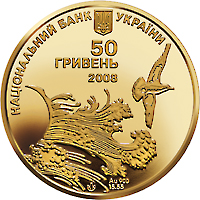 On the obverse of the coin there is a depiction of a sea wave and sea gull, above there is the small National Emblem of Ukraine and the semicircular inscription: НАЦІОНАЛЬНИЙ БАНК УКРАЇНИ (National bank of Ukraine) and the following inscriptions: on the coin made of gold: 50/ ГРИВЕНЬ/ 2008 (50/ Hryvnia/ 2008), as well as designation of the metal Au 900 and its weight in fineness -15,55; on the silver coin - - 10 ГРИВЕНЬ/ 2008 (10 Hryvnia/2008), designation of the metal Ag 925 and 31,1, its weight in fineness; on both coins there is the NBU Mint logotype. 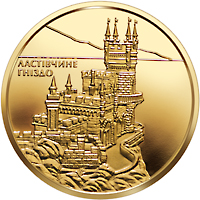 On the reverse of both coins against the background of a mountain and sea there is depicted the architectural monument - Swallow`s Nest resting on the rock and there is placed an inscription: ЛАСТІВЧИНЕ ГНІЗДО ( Swallow`s Nest) (on the left).

The coin is dedicated to Swallow`s Nest, one of the pearls of the Southern Crimea built in 1912 by the architectural engineer Sherwood. 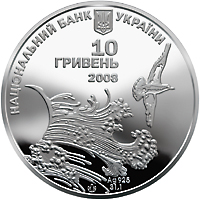 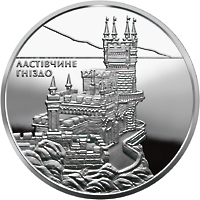