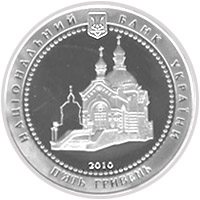 On the coin obverse above there is the Small Coat of Arms of Ukraine with the semicircular legend НАЦІОНАЛЬНИЙ БАНК УКРАЇНИ (National Bank of Ukraine); within the circle formed by beads there is depicted the sepulchral church erected over the scientist`s tomb; beneath there is the coin issue year indication 2010 and bow-shaped inscription П`ЯТЬ ГРИВЕНЬ (5 hryvnias). 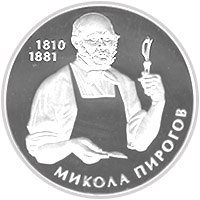 On the coin reverse there is a portrait of Mykola Pyrohov having surgical instruments in his hands, to the left whereof 1810/1881 (the years of life) and the bow-shaped legend МИКОЛА ПИРОГОВ (Mykola Pyrohov) below.

The coin is dedicated to Mykola Ivanovych PYROHOV (1810-1881), a scientist, surgeon, pedagogue and public figure (transliteration from Russian - Nicolay Ivanovich PIROGOV). His innovative scientific works have become the base for the applied anatomy and operative surgery, while his contribution to the development of medicine was marked with a clever combination of the science and practice. Whole life of the great scientist was selfless service to people.