Buy a coin 600 Years of the Battle of Grunwald 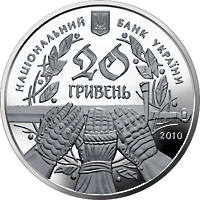 Obverse: above there is the Small Coat of Arms of Ukraine with the semicircular inscription НАЦІОНАЛЬНИЙ БАНК УКРАЇНИ (National Bank of Ukraine) and the coin face value indication 20 / ГРИВЕНЬ (20 hryvnias) thereunder; against the background of the laurel wreath, there is the composition of three armoured hands lying on the sword, which symbolizes the knightly sworn brotherhood and oath of the warriors upon arms before the battle; to the right - the coin issue year 2010. 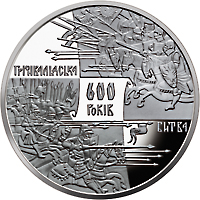 Reverse: there is the composition in the form of diagonal - against the light background (above and below) there are depicted warriors taking the offensive; against the dark background there are the inscriptions: to the left above ГРЮНВАЛЬДСЬКА (Grunwald), to the right below БИТВА (battle), in the centre 600 РОКІВ (600 years).

The coin is dedicated to one of the greatest battles in medieval Europe, i.e. the Battle of Grunwald that occurred in July of 1410 between the crusader knights of the Teutonic Order and united army of the Kingdom of Poland and Grand Duchy of Lithuania including among others troops from Ukrainian lands.

Buy a coin 600 Years of the Battle of Grunwald

Discussion coins 600 Years of the Battle of Grunwald (5)