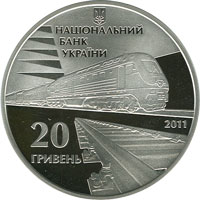 Obverse: above there is the Small Coat of Arms of Ukraine with the inscription НАЦІОНАЛЬНИЙ / БАНК / УКРАЇНИ (National / Bank / of Ukraine); against the dark background there is depicted a modern high-speed train of the Ukrainian Railways and a part of the rail track; to the left indicated is the coin face value 20/ГРИВЕНЬ (20/hryvnias) and to the right - the coin issue year 2011. 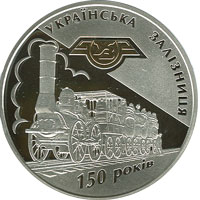 The coin is dedicated to the 150th anniversary of Ukrainian railroads whose operation began with the arrival of the Yaroslav passenger train in Lviv from Peremyshl (Przemysl). The rail transport is the most instrumental in the transportation system of Ukraine. At present, there are six territorial railroad companies operational in Ukraine.