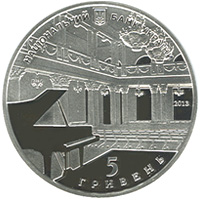 Obverse: above there are the Small Coat of Arms of Ukraine and the semicircular inscription НАЦІОНАЛЬНИЙ БАНК УКРАЇНИ (National Bank of Ukraine); thereunder is the image of Lysenko Colonnaded Hall as seen from the stage, where a grand piano is depicted; to the right there is the coin issue year indication 2013; below there is the coin face value: 5 гривень (5 hryvnias). 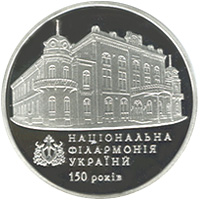 Reverse: against the dark background there is depicted the building of the former Merchants Assembly (1882), where from 1944 up to date the National Philharmonic Society of Ukraine is located; below there are its emblem and the inscription НАЦІОНАЛЬНА/ФІЛАРМОНІЯ/УКРАЇНИ/150 РОКІВ (National / Philharmonic Society / of Ukraine / 150 years).

The commemorative coin is dedicated to the 150th anniversary of one of the oldest concert music performance societies of our country. Such outstanding artists and liberal-minded public figures as the composer M.Lysenko, folklorist M.Rihelman, amateur composer P.Seletskyi and many others helped give birth to the then Kyiv Philharmonic Society in 1863. 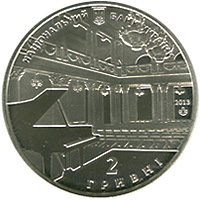 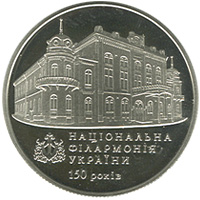