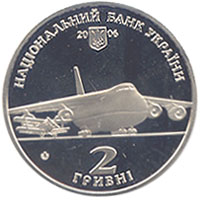 On the coin obverse there are airplanes (AN-2 and AN-124 `Ruslan`) depicted in the centre of the composition, under which the denomination of the coin 2 ГРИВНІ (2 / hryvnias) is placed; above there is a semicircular inscription: НАЦІОНАЛЬНИЙ БАНК УКРАЇНИ (National Bank of Ukraine) with the small State Emblem of Ukraine and the year of issue -2006, as well as the logotype of the National Bank of Ukraine Mint thereunder 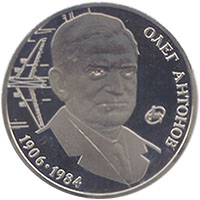 On the coin reverse against the background of a conventionalized engineering drawing there is a portrait of Antonov, to the right of the portrait - the logotype `АN`(AN); there are also semi-circular inscriptions: ОЛЕГ АНТОНОВ (Oleh Antonov) - to the right and 1906 - 1984, the years of his birth and death - left below.

The coin is dedicated to the centenary of birth of Oleh K. Antonov (1906 - 1984), an aircraft designer, under whose guidance various transport, training, sporting airplanes and gliders were built. Oleh Antonov always wished his airplanes, including such giants as `Antei` and `Ruslan`, to be versatile and good-looking, able to convey many cargos and passengers over a long distance. At present the specialist of the Aviation Scientific and Technical Complex named after O.K.Antonov continue the work of the talented aircraft designer.