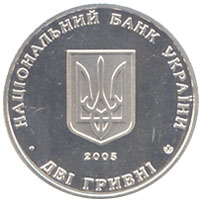 On the coin obverse in the centre there is the small National Emblem of Ukraine, under it there is 2005, the coin issue year, around the coin circumference there are inscriptions: НАЦІОНАЛЬНИЙ БАНК УКРАЇНИ (National Bank of Ukraine) (above), ДВІ ГРИВНІ (2/ hryvnia) (beneath) and the NBU Mint logotype 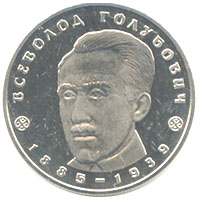 The coin is dedicated to 120th anniversary of Vsevolod Holubovych, a Ukrainian political figure and statesman who made a significant contribution to the process of Ukrainian state-and lawmaking. Since January 18, 1918 he had been the first chairman of the Council of people`s ministers and the minister of foreign affairs of the UPR (Ukrainian People`s Republic). In December 1917 - January 1918 he headed the UPR delegation at the peaceful summit talks with Germany, Austrian and Hungarian Republic, Bulgaria and Turkey.