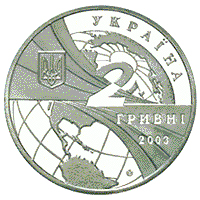 On the coin obverse against the background of the a terrestrial globe there is pictured a composition, symbolizing dynamics of air communication, the small National Emblem of Ukraine and the inscriptions: 2 ГРИВНІ, 2003 (2 hryvnia/ 2003). Above and on the right there is a semicircular inscription: УКРАЇНА (Ukraine).Beneath there is the NBU Mint logotype. 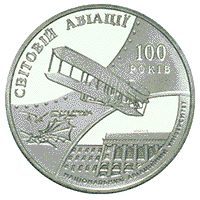 The coin is dedicated to 100th anniversary of the World Aviation. A human being used to dream on flying since many centuries, but practically, aviation (from the Latin: avis - bird) has started its development only in 20th century. The American mechanics, brothers Write were the first to put an internal-combustion engine inside an airplane. The first successful flight of their airplane took place on December 17, 1903. At the end of 30-s a jet-engine was invented. And since that time the aviation has been developing very rapidly.