Buy a coin 350 Years of the Battle of Batih 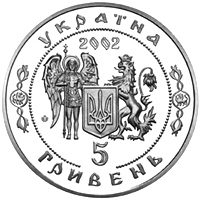 On the coin obverse there is the composition similar to the whole Series of coins which embodies the National idea of the Unified Ukraine: next to the small National Emblem of Ukraine, the emblematic figures of Michael the Archistrategos and crowned lion are located, which are symbols of Kyiv and Lviv Cities. Circular inscriptions are split by baroque ornamentation: УКРАЇНА, 5 ГРИВЕНЬ, 2002, (Ukraine/ 5 Hryvnia/ 2002). There is also the Mint logotype of the National Bank of Ukraine 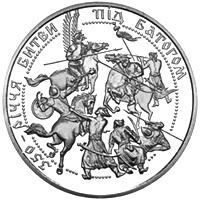 On the coin reverse in the middle of the beads circle, there is a depiction of the battle scene, around which there is a conventionalised inscription: 350-РІЧЧЯ БИТВИ ПІД БАТОГОМ (350 Years of the battle of Batih).

Jubilee coin is dedicated to the historic victory of the Ukrainian army in the battle of Batih in the course of the Liberation war against the Ukrainian-Tartar army headed by Bohdan Khmelnitskiy and the Polish army headed by M.Kalinovskyi. The battle took place on 1-2 June, 1652 on the left bank of the Southern Bug river close to Batih mountain (near the village of Chetvertynivka of Trostianets distrikt in Vinnitsa region)

Buy a coin 350 Years of the Battle of Batih

Discussion coins 350 Years of the Battle of Batih (0)