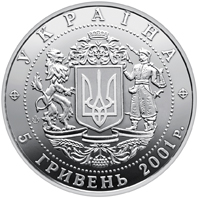 On the coin obverse within in circle made of a string of beads there is depicted a composition which embodies the integrity of Ukraine - the small National Emblem of Ukraine framed with a vegetable ornament is supported by a lion and a Cossack holding a musket. Around the coin circumference there are inscriptions: УКРАЇНА, 5 ГРИВЕНЬ, 2001 (Ukraine/ 5 Hryvnia/ 2001). On the coin there is also the Mint logotype of the National Bank of Ukraine. 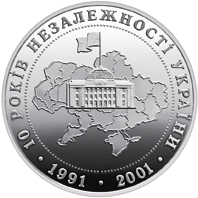 On the coin reverse in circle made of a string of beads within against the background of the map of Ukraine there is depicted the structure of the Verkhovna Rada of Ukraine and circular inscriptions: 10 РОКІВ НЕЗАЛЕЖНОСТІ УКРАЇНИ, 1991- 2001 (10 Years of the Declaration of Independence of Ukraine/ 1991- 2001)

The coin is dedicated to the 10th Anniversary of the Independence Act adoption by the Verkhovna Rada of Ukraine on August 24, 1991.

List price: 7983 грн.
10 Years of the Declaration of Independence of Ukraine 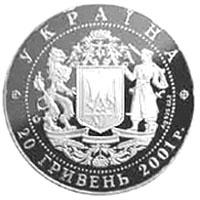 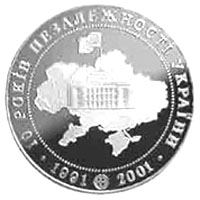