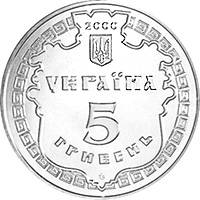 On the coin obverse within the frame of the old Greek ornament and the heraldic cartouche there is the Small State Emblem of Ukraine and the conventionalized inscriptions: 2000, УКРАЇНА, 5, ГРИВЕНЬ, as well as the first logotype depiction of the Mint of the National Bank of Ukraine Mint. 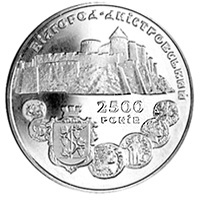 On the coin reverse at its upper part there is the picture of Akerman fortress of the 15th century from the Citadel and Commandant Tower side. Below there is the semi-circular depiction of Akerman`s emblem among the coins of Tyre of the 4th century B.C. - 3d century A.C., there are the conventionalized inscriptions: БІЛГОРОД-ДНІСТРОВСЬКИЙ (Bilhorod-Dnistrovskyi) and 2500 / РОКІВ (2500 /Years).

The coin of 5 Hryvnias denomination is dedicated to the 2500th anniversary of the city of Bilhorod-Dnistrovskyi. It was founded in 6th century B.C by ancient Greeks as the city-state Tyre which became the principal economic and cultural center of the Northern Black Sea Region.