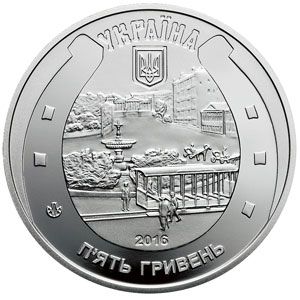 Obverse: above, there is Ukraine`s small state coat of arms, with the semicircular legend Україна (Ukraine) beneath it; at the bottom of the coin are the coin`s issue year - 2016 and face value П`ЯТЬ ГРИВЕНЬ (five hryvnias); a conventionalized composition consists of a horseshoe, in the middle of which is one of Kyiv`s squares; at the bottom, on the left, there is the logotype of the NBU Banknote Printing and Minting Works. 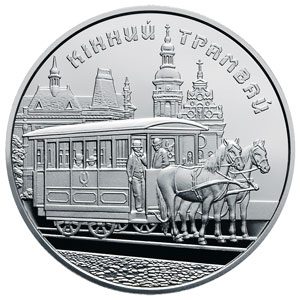 Reverse: against a conventionalized view of the city of Lviv, there is an image of a horse-drawn tram; at the top of the coin there is the semicircular legend КІННИЙ ТРАМВАЙ (horse-drawn tram).

The coin commemorates the horse-drawn tram, which was the first form of street rail transport. During Ukraine`s rapid technological development that occurred in the latter half of the 19th century, projects to construct horse-drawn trams first appeared in Lviv, and later in Kyiv.