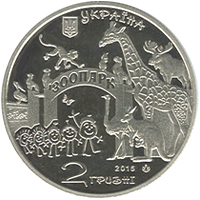 Obverse: above there is the Small Coat of Arms of Ukraine with the semicircular inscription УКРАЇНА (Ukraine), the conventionalized composition: animals in the zoo meeting young visitors at the entrance; below - the legend 2015 (the coin issue year), the coin face value 2 ГРИВНІ (2 hryvnias); the mark of the National Bank of Ukraine Mint (to the right). 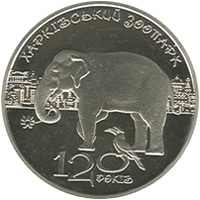 On the reverse: in the centre against the background of the conventionalized image of the city of Kharkiv there are depicted the elephant holding the a flower in its trunk and the inscriptions ХАРКІВСЬКИЙ ЗООПАРК (Kharkiv Zoo) (semicircular, above) and 120/років (120/years)(below).

The coin commemorates one of the oldest zoos in Europe, which performs cultural and educational functions and is the an architectural landmark of Kharkiv. The zoo is located in the city center, occupying the an area of 22 hectares and comprising about 400 species of fish, amphibians, reptiles, birds and mammals. Among them, there are 145 rare and endangered species listed in the International Red List of Threatened Species and the Red List of Threatened Species of Ukraine. In 1925, Kharkiv Zoo was the first in Ukraine to buy for its collection the a representative of one of the largest animals in the world - the elephant.