Buy a coin Battle of the Dnieper 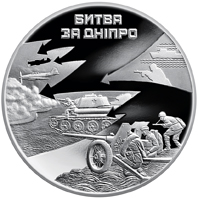 Reverse: there is a conventionalized dynamic composition consisting of the images of an offensive combat wherein different arms participate - tanks, infantry, artillery, aviation, Dnieper Military Flotilla and so on; the mirror-finished part of the reverse symbolizes the Dnieper river; above there is the inscription БИТВА / ЗА ДНІПРО (Battle / of the Dnieper).

The commemorative coin is dedicated to the offensive operations of September-December of 1943. These events became the accomplishment of the radical turn in the Great Patriotic War, i.e. of the battle of the Dnieper, in the course of which the city of Kyiv, the capital of Ukraine, was liberated. The battle became the culmination in the liberation of Ukraine, had a significant influence on the subsequent course of the military operations and was conducive to the defeat of the fascist invaders.

Discussion coins Battle of the Dnieper (19) 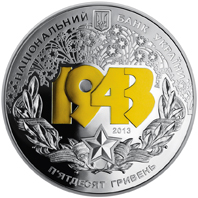 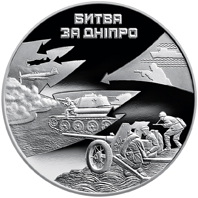