Buy a coin 1025th Anniversary of Christianization of Kyivan Rus 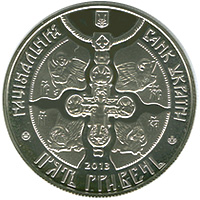 Obverse: above there is the Small Coat of Arms of Ukraine with the semicircular legend НАЦІОНАЛЬНИЙ БАНК УКРАЇНИ (National Bank of Ukraine); below there are the coin issue year indication 2013 and the coin face value: П`ЯТЬ ГРИВЕНЬ (five hryvnias). There is the mark of the National Bank of Ukraine Mint to the right. In the center of the coin there is the composition consisting of the image of an encolpion (pectoral cross) and symbolic figures of the Four Evangelists: Matthew as an angel, Mark as a lion, Luke as an ox and John as an eagle. All the figures are winged and holding the Gospel. 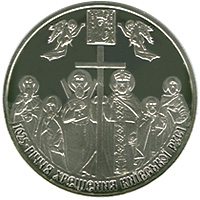 Reverse of 5 hryvnia coin bears a composition consisting of some figurines: Volodymyr the Great and Andrew the First-Called holding the Cross together with the Saints: Anthony and Theodosius of the Caves, Cyril and Methodius; above there is depicted the icon of the Blessed Virgin of Zymne with images of angels to the left and right thereof; below there is the semicircular legend 1025-РІЧЧЯ ХРЕЩЕННЯ КИЇВСЬКОЇ РУСІ (1025th Anniversary of Christianization of Kyiv Rus).

The commemorative coin is dedicated to the introduction of Christianity by Volodymyr the Great as the established religion, which was conducive to unification and consolidation of Kyivan Rus, literacy propagation, good prospects of economic and cultural relations, etc. 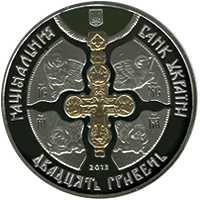 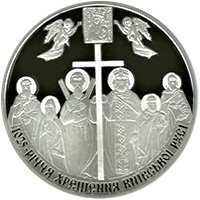