Buy a coin 350 Years of the City of Ivano-Frankivsk 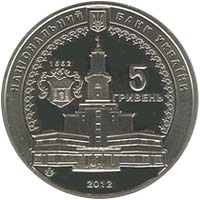 Obverse: above there are the Small Coat of Arms of Ukraine and the semicircular legend: НАЦІОНАЛЬНИЙ БАНК УКРАЇНИ (National Bank of Ukraine); in the centre there is depicted the building of Ratusha (City Hall), to the left whereof there are the coat of arms of the city and legend 1662; below there is the indication of the coin issue year 2012; to the right of Ratusha image there is indicated the denomination - 5/ГРИВЕНЬ (5 hryvnias). On the 5 hryvnia coin, below to the left, there is the National Bank of Ukraine Mint logo. 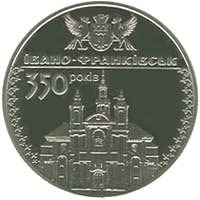 Reverse: on the coin there is depicted one of the oldest architectural monuments of the city - the Church of Virgin Mary; the city coat of arms is above together with the inscription ІВАНО-ФРАНКІВСЬК/350 РОКІВ (Ivano-Frankivsk/350 years) thereunder.

The commemorative coins is dedicated to the 350th anniversary of Ivano-Frankivsk (till 1962 - Stanislav), an oblast center of Ukraine, located at the foot of the Carpathian mountains in the interfluve of the rivers Bystrytsia-Nadvirnianska and Bystrytsia-Solotvynska (Dniester-river basin). The city is mentioned for the first time in written sources under 1662, when the Magdeburg rights were granted to it.

Discussion coins 350 Years of the City of Ivano-Frankivsk (5) 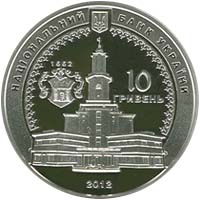 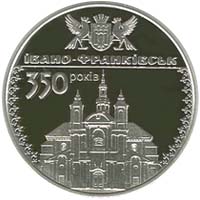