Buy a coin 800 years of the City of Zbarazh 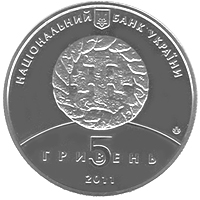 On the obverse above there are: the Small Coat of Arms of Ukraine and the semicircular legend НАЦІОНАЛЬНИЙ БАНК УКРАЇНИ (National Bank of Ukraine); there is depicted the cartouche bearing the Jerusalem cross extant on a wall of the Saviour`s Transfiguration Church of the city of Zbarazh; under the cartouche there is the legend 5/ ГРИВЕНЬ/2011 (5/hryvnias) and the logotype of the National Bank of Ukraine Mint to the right. 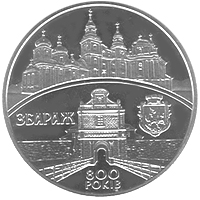 On the reverse there is depicted, in the foreground, the Main Entrance Tower of the Zbarazh Castle with the inscriptions: to the left ЗБАРАЖ (Zbarazh) and below 800/РОКІВ (800/years); to the right of the tower there is depicted the coat of arms of the city; in the background there are the most remarkable architectural monuments of the city centre.

The commemorative coin is dedicated to the city of Zbarazh located on the Hnizna-river (Dniester-river basin) in Ternopil Oblast. It was mentioned for the first time under 1211, when it formed a part of the principality of Galicia (Halych)-Volhynia and was one of the most fortified centres of the local appanage principalities. The city also became well-known owing to the events in the period of the liberation war of the Ukrainian people of 1648-1654.

Buy a coin 800 years of the City of Zbarazh

Discussion coins 800 years of the City of Zbarazh (0)