Buy a coin 80 Years of Declaration of UPR Independence 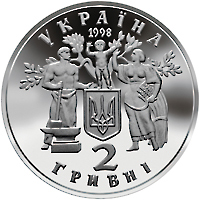 On the coin obverse there is the small National Emblem of Ukraine. On the left and on right from the National Emblem, there is a depiction of a worker with a hammer near forge iron and a peasant woman with a sickle and sheaf against a background of a tree crown; they hold a baby - symbol of the young state. This three-figured composition is an adapted version of Heorhyi Narbut`s graphic works. Above, there is a two-line inscription: УКРАЇНА (Ukraine) 1998; underneath, there is a two-line inscription 2 ГРИВНІ (2 Hryvnias). 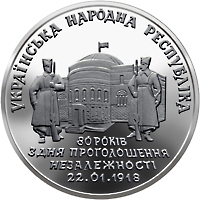 On the coin reverse at the center, there is a depiction of the Pedagogical museum - the headquarters of the Central Rada in 1917-1918. In front of the building at its both sides there are figures of two gunner-guards with rifles. Under the depiction, there is a four line legend: 80 РОКІВ З ДНЯ ПРОГОЛОШЕННЯ НЕЗАЛЕЖНОСТІ 1918. Above, around the circumference there is an inscription: УКРАЇНСЬКА НАРОДНА РЕСПУБЛІКА. All inscriptions are made with a print, developed by H.Narbut, the artist of first Ukrainian banknotes of 1917-1920

Buy a coin 80 Years of Declaration of UPR Independence