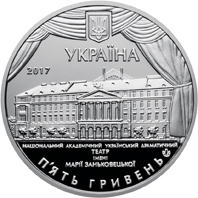 Obverse: above against the background of a wing flat is Ukraine`s small coat of arms, below which are the legend УКРАЇНА (Ukraine) and the issue year - 2017 (to the left); in the center against a smooth background is the theater`s building, below which is the following legend: НАЦІОНАЛЬНИЙ АКАДЕМІЧНИЙ УКРАЇНСЬКИЙ ДРАМАТИЧНИЙ/ ТЕАТР/ ІМЕНІ/ МАРІЇ ЗАНЬКОВЕЦЬКОЇ (Maria Zankovetska Ukrainian National Academic Drama Theater); beneath is the coin face value - П`ЯТЬ ГРИВЕНЬ (five hryvnias) (semicircular); to the left is the mint mark of the NBU Banknote Printing and Minting Works. 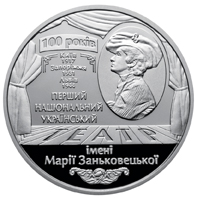 Reverse: against the background of a wing flat is a portrait of Maria Zankovetska, to the left of which are the following legends: 100 РОКІВ (100 years) and КИЇВ/ 1917/ ЗАПОРІЖЖЯ/ 1931/ Львів/1944/ ПЕРШИЙ НАЦІОНАЛЬНИЙ/ УКРАЇНСЬКИЙ (Kyiv/ 1917/ Zaporizhia/ 1931/ Lviv/ 1944/ First National / Ukrainian), the names of the cities and the years when the theater started operating in those cities; against the background of a stage is the following smooth legend: ТЕАТР (theater), below which is the legend: ІМЕНІ/ МАРІЇ ЗАНЬКОВЕЦЬКОЇ (Maria Zankovetska).

This coin commemorates the 100 years since the establishment of the Maria Zankovetska Ukrainian National Academic Drama Theater. The theater, which was founded in 1917 with the support of the Central Council, and which was called the Ukrainian National Theater, brought together actors from various theater companies. The government sponsored the theater`s tours, which gave performances in Kyiv, Chernihiv, Poltava, Zhytomyr and Katerynoslav. The company included famous Ukrainian actors such as Maria Zankovetska, Varvara Liubart, Olha Polianska, Hryhorii Marynych, Borys Romanytskyi, as well as talented young actors. The complicated social and political developments, and the constant change of governments in those days, had a bearing on the theater`s development: the theater was reorganized several times and bore different names (the People`s State Theater, the Ukrainian People`s Theater, and the People`s Theater). The theater also changed its location - from 1931, it operated it the city of Zaporizhia; while in 1944 it moved to Lviv, where it has been operating until the present day. 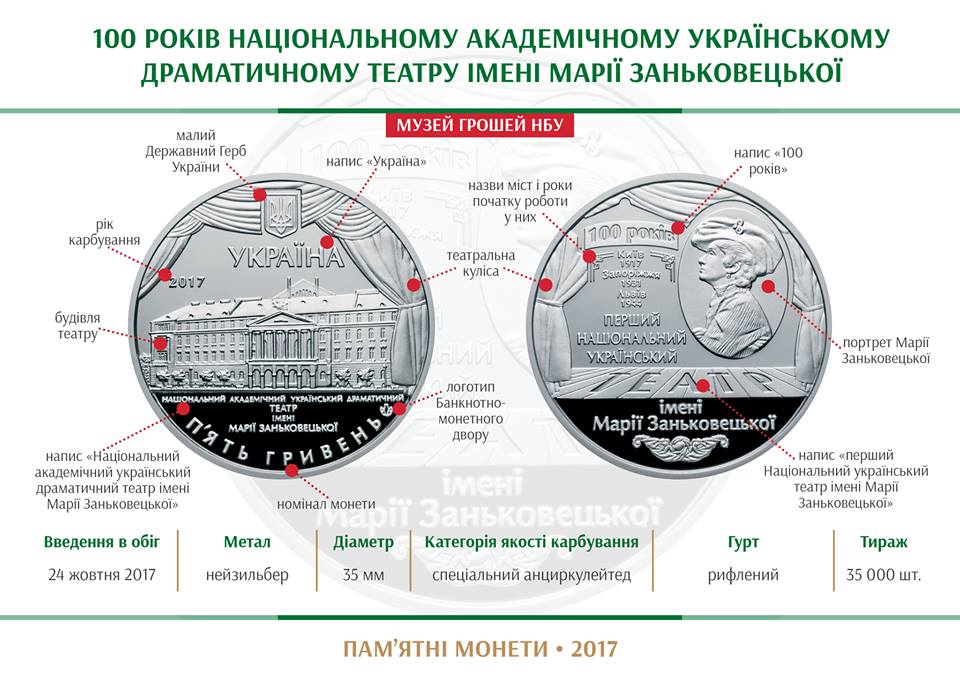