Buy a coin The Auroch 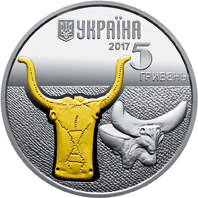 Obverse: above is Ukraine`s small coat of arms, the legend УКРАЇНА (Ukraine), the coin issue year 2017 and the coin face value 5/ ГРИВЕНЬ (5/hryvnias); there are monuments that stem from the unique Trypillian culture: in the center is a gilt bone plate in the form of an auroch`s head (Ternopil oblast, 3700 - 3500 B.C.), to the right of which is a ritual vessel decorated with an auroch`s head.

Reverse: there is an auroch`s head (to the left) and a fragment of a cave painting which depicts an auroch and goats that comes from the Stone Tomb (Kamyana Mohyla) in Zaporizhzhia oblast (to the right). The grottos and caves of the Stone Tomb feature several thousand petroglyphs - cave paintings that date back to a period from the Late Stone Age to the Middle Ages. On the right, against the background of the painting, is the legend ТУР (auroch).

This coin celebrates the auroch and its representations on the unique monuments of ancient cultures that inhabited Ukrainian lands and made an important contribution to the world`s collection of antiques.

Buy a coin The Auroch