Buy a coin 975 Years of the City of Bohuslav 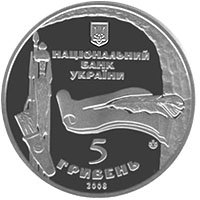 On the coin obverse there are: the Small National Emblem of Ukraine with the legend НАЦІОНАЛЬНИЙ БАНК УКРАЇНИ (National Bank of Ukraine) thereunder and the conventionalized composition: the Cossack weapons and Hetman`s bunchuk (standard) on the left, a manuscript with a quill pen on the right, which symbolize the Cossack epoch and literary fame of the city; under them - the face value 5 ГРИВЕНЬ (5 hryvnias), the coin issue year 2008 as well as the logotype of the National Bank of Ukraine Mint. 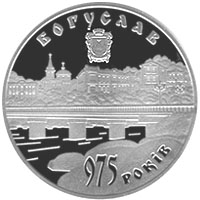 On the coin reverse there are depicted architectural monuments of the city centre and the bridge across the Ros River; above there are the semicircular inscription БОГУСЛАВ (Bohuslav) and the coat of arms of the city thereunder; beneath, against the background of stones, there is the legend 975 РОКІВ (Years).

The commemorative coin is dedicated to Bohuslav, a picturesque city situated on the Ros River banks. Bohuslav, together with the cities of Korsun and Kaniv, was one of the most fortified boroughs on the southern border of the Kyiv Rus. Outstanding works of the Ukrainian folk poetry, such as the duma `Marusia Bohuslavka`, the ballad `In the borough of Bohuslav`, were dedicated to the city, life and fight of its population

Buy a coin 975 Years of the City of Bohuslav

Discussion coins 975 Years of the City of Bohuslav (0)