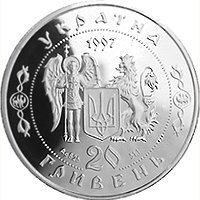 On the coin obverse in the middle of the beads circumference decoration, there is the composition symbolizing the national idea of Unification of Ukraine: the emblematic figures of the Holy Michael Archistrategos, the patron of Kiev and crowned lion of Galitch and Volhyn principalities hold the Small State Emblem of Ukraine-Trident on the shield. Over the composition, there is the year of coin issue -1997. Above, around the coin external circumference there is an inscription: УКРАЇНА and - underneath in two line - 20 ГРИВЕНЬ, coin`s face value 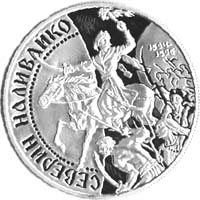 The commemorative coin of 20 Hryvnias denomination is dedicated to the memory of Severyn Nalyvayko (? - 1597), leader of Cossack-peasant uprising of 1594-1596 in Ukraine against Polish domination