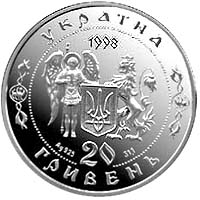 On the coin obverse in the middle of the beads circumference decoration, there is the composition general for the whole series symbolizing the national idea of Unification of Ukraine: near the Small State Emblem of Ukraine there are the emblematic figures of the Holy Michael Archistrategos, the patron of Kiev and crowned lion, symbol of Lviv. Around the composition, there are conventionalized inscriptions, separated from one another with baroque ornaments and griffins depictions: УКРАЇНА and 1998 (above), 20 ГРИВЕНЬ, (underneath in two lines) and the symbol of the precious metal, its fineness and weight. 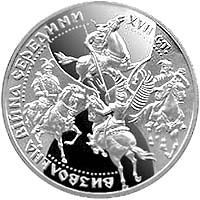 On the coin reverse in the beads circumference against a background of a sand-glass, symbol of heredity of ages, there is a depiction of a fight of Zaporizhzhia Cossack and a Polish winged Reitar. Aside of the battle scene there are rider figures: Hetman Bohdan Khmelnitsky, leader of the liberation movement and a Bandura-Cossack, bard of heroic campaigns. Around the composition there is a conventionalized inscription: ВИЗВОЛЬНА ВІЙНА СЕРЕДИНИ ХVІІ СТ.

The coin is dedicated to 350 Years of the Liberation War in the Middle of 17th Century for independence and creation of the national state. T