Buy a coin Danylo of Halych 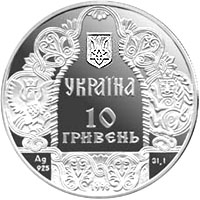 On the coin obverse within the frame of an ornament of the capitals of 12th century Halych stone church with the emblematic figures of a bird and a lion which are the symbols of the cities of Halych and Lviv, there are depictions of the small National Emblem of Ukraine and the conventionalized four-line inscriptions: УКРАЇНА, 10 ГРИВЕНЬ, 1998 and the indications of the precious metal, its fineness and the coin weight in fineness 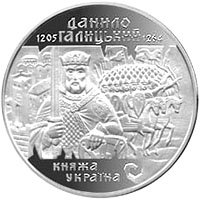 On the coin reverse against the background of a roll there is a three-view composition, consisted of the portrait depiction of Prince Danylo, wearing the ceremonial attire of a warrior, as well as old-Rus buildings and Prince`s troops. On the coin there is a legend: ДАНИЛО ГАЛИЦЬКИЙ 1205-1264 (Danylo of Halych) (above in two lines) and КНЯЖА УКРАЇНА (Princes of Ukraine (underneath in two lines).

The coin is dedicated to Danylo of Halych (1201-1264), the Duke of the Grand Duchy of Halytsien and Volynien

All coins in serie Ukraine
All coins 1998 year of release

Buy a coin Danylo of Halych