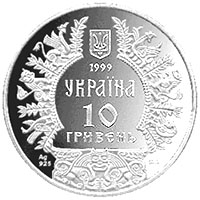 On the coin obverse within a frame of an old-Rus pattern ornament there are depicted the sall National Emblem of Ukraine and the conventionalized inscriptions: УКРАЇНА, 10, ГРИВЕНЬ, 1999 (Ukraine/ 10/hryvnia/1999) and the designation of the metal, its fineness and the coin weight in fineness. 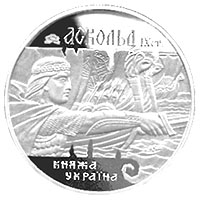 On the coin reverse against the background of a roll there is depicted the Prince, who leads his men at armsto a sea campaign. There are the following conventionalized inscriptions on the coin: АСКОЛЬД ІХ ст.( Askold / ІХc.) and КНЯЖА, УКРАЇНА (Princes of Ukraine)

The coin is dedicated to the Prince Askold (?-882), the ruler of the Kyiv state.

All coins in serie Ukraine
All coins 1999 year of release