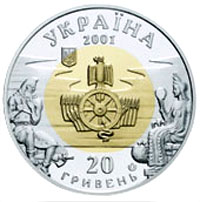 On the coin obverse in the centre of the insert ring and against the background of rye ears there is depicted of a symbolic wheel of history with a falcon sitting on it, underneath it there is depicted a snake; above and to the left there is the small National Emblem of Ukraine; within the outer ring, there are depicted a Scythian warrior with a bowl in his hand (on the left) and a Scythian queen holding a mirror (on the right), as well as the logotype of the NBU Mint and the inscriptions: УКРАЇНА / 2000 / 20 / ГРИВЕНЬ (Ukraine/ 20/ hryvnia/ 2000) 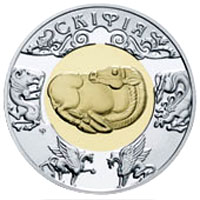 On the coin reverse within the insert ring there is a depiction of a archeological find (7th beginning of 6th centuries B.C.) a Scythian plate which decorated a female headdress; within the outer ring there are conventionalized depictions made in so-called Scythian animal style and the inscription: СКІФІЯ (Scythia)

Commemorative coin of 20 Hryvnias denomination is dedicated to a great union of Scythian cattle-breeding and settled tribes (7th century B.C. - 3d century A.D.) which inhabited the steppe and forest-step regions of today` Ukraine. The political union of Scythian tribes played important role in the life of the south-western Europe and the northern Black Sea regions