Buy a coin Yaroslav the Wise

On the coin obverse within the frame of old-Rus ornament recreated from the pattern on the Yaroslav the Wise`s sarcophagus, there are depicted the small National Emblem of Ukraine and the conventionalized inscriptions: 2001 / УКРАЇНА / 10 / ГРИВЕНЬ (Ukraine/ 10/ hryvnia), the indication of the metal, its fineness, as well as the logotype of the NBU Mint. 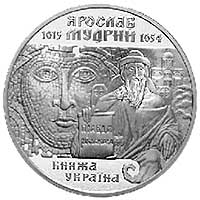 On the coin reverse there is depicted the Yaroslav the Wise, holding the Kyiv Rus Code of Laws in his hand with the inscriptions: `ПРАВДА РУСЬСКАЯ` (Pravda/ Russkaia). On the left there is the mosaic depiction of Orante face and on the right there is depicted a cathedral. There are the conventionalized inscriptions: ЯРОСЛАВ / 1015 / МУДРИЙ / 1054 / (Yaroslav/ 1015/ the Wise/ 1054) - above, and КНЯЖА УКРАЇНА (Princes of Ukraine) - below.

The coin is dedicated to Yaroslav the Wise (1015-1054), the Great Kyivan Prince and statesman, during whose reign the Kyivan Rus had strengthened and expanded its borders; the international position of the state was reinforced; the Kyiv archdiocese was founded; the legal code of the Old Rus state was developed; the old-Rus culture had reached the peak of its development

All coins in serie Ukraine
All coins 2001 year of release